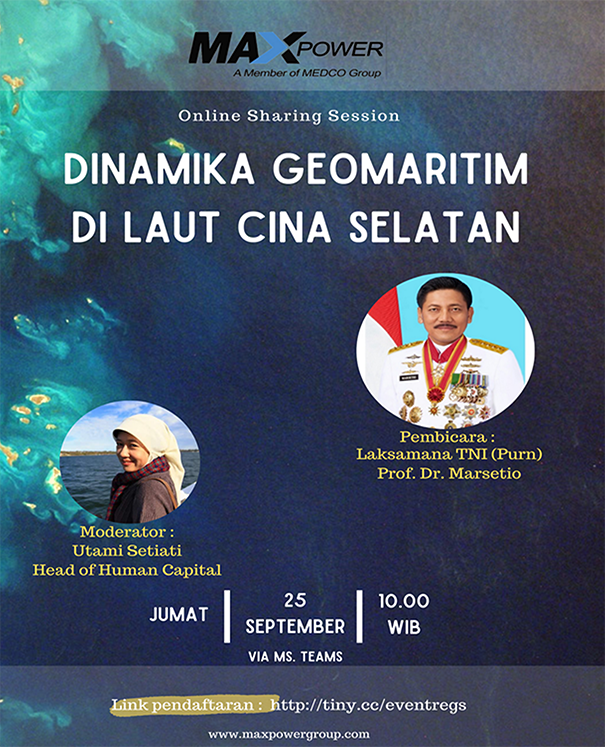 Friday, 25 September 2020 / Knowledge Sharing this time with theme “Geomaritim Dynamics in the South China Sea” held online on Friday, 25 October 2020 at 09.00 WIB. In this session, the participants were invited by speaker, Laksamana TNI (Purn) Prof. Dr. Marsetio and assisted by moderator, Mrs. Utami Setiati as the Head of Human Capital Maxpower Group to be able to find out about the potential that can be generated from traffic flow in Indonesia as one (1) of the maritime country in the world.

Prof. Dr. Marsetio explained about the traffic flow in Indonesia. As one (1) of the maritime country in the world, Indonesia has 4 (four) of the 9 (nine) choke points in the world. In military strategy, choke points are geographic features on land such as valleys, defiles or bridges, or straits through which an army must pass to reach its destination. Usually with a narrower entrance so that it reduces the combat capability of an army.

Furthermore Prof. Dr. Marsetio explained that if there is a dispute around the South China Sea, it will have an impact on the Indonesian state. He also explained what preparations have been made by the Indonesian government in facing the worst possible impact of international geopolitics, especially between China and America.

Knowledge Sharing is regularly held by the Human Capital Department of Maxpower Group every once a week with fun and educational themes!